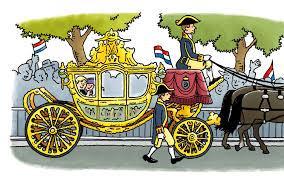 Budget Day is very important day for politics in the Netherlands. On Budget Day speaks the head of state, now King Willem-Alexander, the speech off. In the throne speech tells the government policy of the coming year.

The name Prinsjesdag was used in the 17th and 18th centuries. At the time, this name was used for the anniversaries of the Princes of Orange. Budget Day as we know it today was first held in 1814, then in May. Until 1848, the King decided the content of the speech. After 1848 some ministers the contents of the throne speech. The King therefore only reads the speech from the throne to.
The Constitution determines when Budget Day is held. Initially this was on the first Monday in November and then on the third Monday of October. In 1848, stipulates that there must be introduced annual budget. The room wanted more time to adopt this budget and therefore Prinsjesdag was brought forward back to September. Monday was a difficult day because they could not all be on time in The Hague and one could not travel on Sunday by Sunday rest. Therefore, it was decided to Tuesday.

The head of state.

The Head of State and the Royal House to play a major role in the celebration of Prince. This role is questioned for a long time. Already in 1872 there was criticism leveled at the large role of the head of state. At that time there was already a ministerial responsibility, Ministers also endorsed the throne speech. People felt that the ministers also had read the speech from the throne. In addition, people find that the King should not be accompanied by the Royal Family, but by members of the government. The members of the Government would make government policy.